After the 2008 international financial crisis hit hard, the export of the Yangtze River Delta region has entered a stage of low- and medium-speed growth. However, in the past two years, the export of electromechanical exports, especially LED lighting products, has shown a trend of contrarian growth, which seems to bring a "warm flow" to the cold wave of foreign trade exports in the Yangtze River Delta.

An official from the Hangzhou Entry-Exit Inspection and Quarantine Bureau told the reporter of Gaogong LED that in 2012, the bureau inspected a total of 2,838 batches of LED lamps, with a value of 256 million US dollars, an increase of 0.3% and 48.1%.

The export situation of LED lamps in Ningbo seems to be more gratifying. According to statistics from Ningbo Inspection and Quarantine Bureau, in 2012, a total of 56,000 batches of LED lighting fixtures were exported in Ningbo, with a value of 1.45 billion US dollars, up 12% and 23% year-on-year.

In addition to the above two major export towns, the number of lamps and lanterns exported by seven cities and counties such as Shaoxing, Wujiang, Huzhou, Zhenjiang and Kunshan has risen to varying degrees, and some even broke the historical record. Although the export volume has increased by a large margin, this does not mean that the LED export situation in the Yangtze River Delta region is very good, especially in the second half of 2012, after the United States, Japan, Mexico and the European Union and other countries and regions have successively raised the threshold of LED lighting imports, domestic LED lamps Export companies may face the big test again.

â€œIn addition to the impact of the international financial crisis in 2008 and the sluggish overseas market, domestic lighting exports have continued to grow in recent years, reaching US$21.71 billion in the first three quarters of 2012, a year-on-year increase of 36%. Although the Yangtze River Delta region is not an LED exporter. The main battlefield, but in recent years, the growth rate is relatively fast.â€ Zheng Yong, general manager of Zhejiang Sunshine Lighting, told reporters that in 2012, Sun Lightingâ€™s LED lighting sales were about 364 million yuan, accounting for 14% of the total performance, of which LED lighting exports accounted for The ratio is about 62%, a year-on-year increase of 23%. 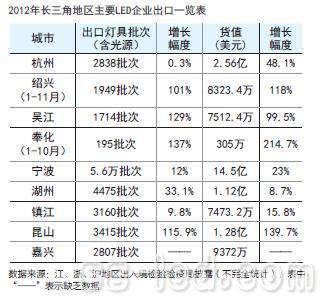 For SMEs, LED lighting products still have great opportunities to enter the overseas market. Zhejiang Huatai Electronics Co., Ltd. (hereinafter referred to as â€œHuatai Electronicsâ€) is a high-tech private enterprise. In 2006, the company transformed its LED lighting business. In 2009, it began to export LED lamps. In 2012, the export value of LED lighting was about 60 million yuan.

"Overall, LED lighting overseas market is still relatively prosperous. At present, the company's LED lighting exports account for more than 80% of the total LED business revenue, basically every quarter of the export growth rate is around 30% -50%." Huatai Electronics Zhu Yiming, the general manager, told reporters that since the second half of 2012, LED export orders have started to grow rapidly. Now Huatai Electronics LED lighting products only account for more than 50% of the German gas station lighting renovation.

"The European market is the main region for our exports. The gross profit margin of overseas markets is basically maintained at 30%-40%. As long as the quality is good, the opportunity is still very large." Zhu Yiming said that the SMEs do not dominate the domestic market. The cost of terminal channel deployment is high, so it is better to concentrate on overseas markets and gain a place.

However, Wang Songliang, general manager of Hangzhou Feiyang Electromechanical Co., Ltd. believes that enterprises must enter the overseas market according to market demand, and can not blindly expand the export ratio. Enterprises must first practice internal strength and then seize opportunities. â€œFeiyang Electromechanical currently exports about 30 million to 40 million LED lighting products, accounting for about 30% of the total business revenue.â€

Overall, LED lighting exports in the Yangtze River Delta region are growing rapidly. Although the outlook is optimistic, there are huge hidden dangers behind the data.

Recently, an official from the Exit and Entry Inspection and Quarantine Bureau of Hangzhou Municipality, the Electrical and Mechanical Services Department, told the reporter that in 2012, the Hangzhou Bureau had conducted a sampling test on a batch of LED lamps exported from the jurisdiction. The test results show that in the sample of the extracted LED lamps, the one-time detection failure rate is as high as 100%.

â€œMost LED companies in the Yangtze River Delta region have been transformed from the electronics industry or other industries. They donâ€™t know much about national or international standards for LED lighting. There may be some omissions in the manufacturing process.â€ According to the reporter of "High-tech LED", this also reflects the serious lack of technical talents in the LED lighting industry in the Yangtze River Delta region.

The official said that the requirements of the LED industry for technical talents are comprehensive, including electronics, optics, structure, etc., and must have a certain degree of understanding of the safety of lamps. "At present, LED companies in the Yangtze River Delta region are very lacking in such comprehensive talents." In addition, the reporter learned from the Kunshan City Inspection and Quarantine Bureau that the 2012 EU Non-Food Rapid Alert System (RAPEX) notified China's export of LED lighting products up to 37 times.

"The reason why the failure rate of China's LED lighting products in overseas markets was so high last year was mainly because the price war of LED export products played very badly after June last year, resulting in many inferior lamps flowing into the EU and the US market. The quality is uneven, which has caused the foreign market to greatly reduce the trust of Chinese export enterprises." Zhu Yiming told reporters.

"The style of LED export products does not need to be done too much. It is difficult to carry out the selling point with novel appearance and packaging. We only do the products circulating in the market and steadily expand overseas markets." Zhu Yiming told reporters about him. After years of experience in overseas battlefields, â€œIn the past two years, we have not developed much new products. We mainly focus on several mature products that have already been launched. The quality of our products is getting better and better, so orders have been very popular recently. â€

Standards need to be cautious

Domestic LED companies ultimately sacrificed their own products at the expense of product quality and low price.

Beginning in the second half of 2012, the EU, the United States, Japan, Israel and other countries and regions have raised the import threshold for imported directional lamps and LED lighting products.

Taking the EU's notification law as an example, it is required that only directional LED lamps and directional phosphor lamps with an energy efficiency index of 0.2 or higher can enter the EU market, and the LED energy efficiency rating requirements are increased by 2.5 times, and officially entered on September 1, 2013. The first stage.

â€œThe threshold for importation in overseas markets will continue to increase, which will have a direct impact on export enterprises. For example, the US notification law requires LED companies to be equipped with corresponding testing laboratories and testing equipment. For small and medium-sized enterprises, this is a very large Cost.â€ Chen Kai, general manager of Zhejiang Huapu Yongming Optoelectronics Co., Ltd. told reporters that in response to the standards of European and American countries, Maple Yongming has set up an LED lighting testing laboratory and related supporting facilities.

Chen Kai said that the investment in the establishment of an LED testing laboratory, including annual operating and maintenance costs, from as little as four hundred and fifty thousand yuan, and more than one million yuan. There are more LED small and medium-sized enterprises in Jiangsu and Zhejiang provinces, and the support of the capital chain is limited. Additional expenses may bring great pressure on them.

"In the face of the improvement of import standards in the EU, the United States and Mexico and other countries and regions, we must focus on our core products. Many enterprises export products are more complex, but they often fail to meet the requirements in terms of quality and performance standards." Ningbo Jiang Yan, general manager of Global Optoelectronics, told reporters that LED companies in the Yangtze River Delta region are relatively weak in terms of scale and operational strength. Enterprises may have to do a full range of products, which may be incapable, so companies must have clear target positioning. The characteristics of an LED product are extremely high and the competitiveness will be greatly improved.

A person in charge of LED product testing said that the standardization and international standards are inevitable trends, and the threshold for follow-up may be further improved. LED export enterprises should take a positive view of the EU's regulations to raise the barriers to entry.

The relevant person in charge of the Ningbo Inspection and Quarantine Bureau suggested that LED export enterprises should maintain long-term attention to the standards and policies related to major export destinations, and they should not be impetuous in terms of mentality in the face of high standards.

"We have contacted some LED companies in the jurisdiction, often investing tens of millions in the early stage, but so far, there is still no improvement in market share, export orders and profits." The above person in charge suggested that for this situation, you need to sink If you want to do your own products, you must have long-term commitment.

"In the fourth quarter of 2012, the state has already waived the inspection fees of LED exporters, and the support and preferential policies in the future in terms of tax rebates and financial subsidies will continue to strengthen," said the official.