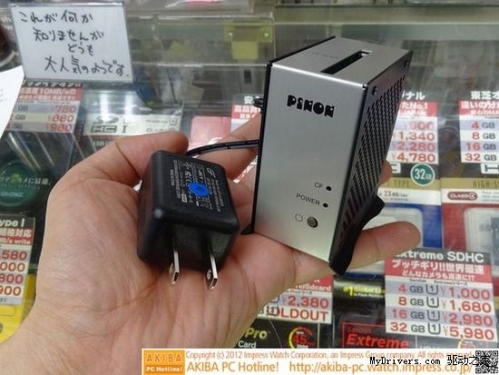 Recently, an ultra-small PC began to be listed in Tokyo's Akihabara and other places. Due to its unique positioning, digital control and electronics houses have attracted attention. In fact, as early as 2005, there was a micro-computer called Sizka once became a topic, but this time the PC is smaller, not even as large as a normal DC power adapter, it can be said to be the smallest PC now.

Next you will definitely ask, what can such a small PC do? The answer is that it does not do anything, at least for the average user it is almost useless. However, it has built-in DOS and BASIC, which can be programmed using languages â€‹â€‹such as Fortran and pascal. For electronics homes, this ultra-compact PC has a unique charm.

The PC is equipped with a processor Vortex86DX (800MHz) produced by DMP Electronics. Although it is not as powerful as Intel's Atom processor, DOS and BASIC are pre-installed in the CPU's flash memory, which means that the operating system Installed in the CPU, so it can run in a low configuration environment.

At present, this kind of micro-PC is already on the market in Japan. Prices range from 42200 to 45800 yen. It is enough to buy a medium-sized computer. Although it seems to be incomprehensible to ordinary consumers, it is among technical houses. But it is quite hot.